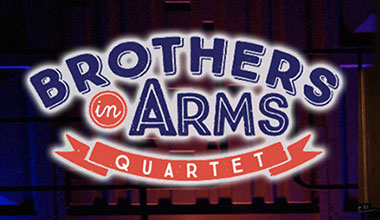 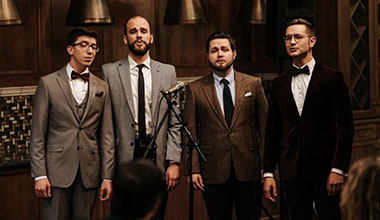 Formed originally in high school, Brothers in Arms sang for the first time in 2010. This group of guys was encouraged by their music teachers at Mechanicsburg Area Senior High School, but especially Dr. Eric Dundore. Proud parents and friends pushed them to practice more, and by the end of the following school year, their performance at the annual choral concert was a huge hit.

They were invited to sing with the Keystone Capital Men's Chorus in Harrisburg, PA, where they were adopted and mentored for the next two years. Now, as charter members of the new Parkside Harmony Chorus, based in Hershey, PA they are competing at the highest levels, including the recent International BHS competition in Nashville, TN.

In 2018-19 they took a break from competition only to reform in late 2019 with newcomer Douglas Beach singing baritone. 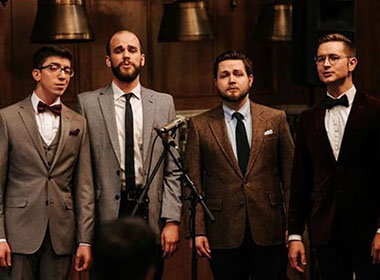 Tenor is Kevin Juliana, from Mechanicsburg, PA, is a graduate of Central Penn College (Summerdale, PA) with a degree in occupational therapy. He sings with the Parkside Harmony Chorus as well.

Jordan DuBois, singing bass, is also from Mechanicsburg, PA and a charter member of Parkside Harmony Chorus. He is studying at Harrisburg Area Community College.

Douglas Beach is a 2018 graduate of Messiah College, where he studied piano and composition. He currently serves as Director of Music at Yorkshire United Methodist Church, and staff accompanist at Lancaster Bible College and Franklin and Marshall College. Douglas has been a member of the Barbershop Harmony Society for six years, and is honored to carry on his grandfather's legacy as a third generation barbershopper. Douglas enjoys arranging for his quartet and church choir, and has recently premiered a commissioned work for the Susquehanna Chorale in collaboration with Musical Director Linda Tedford.

Brothers in Arms Quartet is part of the Mid-Atlantic District (M-AD) of the Barbershop Harmony Society. The M-AD is divided into four Divisions, and their quartet is part of the Western Division, which covers quartets in Central PA such as State College, Somerset, Pottstown, and down into the Baltimore Annapolis area.

At the October 23-24, 2015 MidAtlantic District conference in Ocean City, Maryland, they were honored as the District's Best Novice quartet for 2015, and took the bronze medal as third place in the District.